With the expertise necessary to complete projects safely and on schedule, the highly skilled members of Local 33 provide quality craftsmanship throughout central and western Iowa. Our productive workforce of 1,650 plumbers, steamfitters, welders, and HVAC/refrigeration technicians are highly-trained and ready to work on multi-family housing, commercial and industrial facilities, as well as process piping.

If you’re a contractor in our jurisdiction, we can supply the manpower to meet your needs in plumbing, heating, air conditioning, controls, medical gas, high purity piping, valve repair, water treatment and other specialties.

If you’re looking for a career, our trade is one of the most promising and lucrative possibilities!

Des Moines, Iowa, had become a veritable boomtown as the end of the 19th Century approached: Between 1880 and 1890, its population exploded from about 22,400 to over 50,000 residents (and would surpass 62,000 by the turn of the century). What’s more, the city’s infrastructure was also expanding exponentially; by 1892, a total of almost $2 million (a small fortune by today’s standards) had been spent over the previous 10 years to develop its streets with sewers, paving and curbing.

Meanwhile, skilled-trades workers in Des Moines were becoming organized at a hurried rate. In fact, by July 1891, there were 16 trade unions in the city, whereas there had only been five just three years earlier, including carpenters, bricklayers, painters and plumbers’ locals, the Des Moines Register reported on July 18 that year.

The newspaper went on in the article to espouse:

“Several new unions are now being organized, and before next winter this city can boast of being a better organized city among the working population than any city in the West.

Trades unions are a good thing for all mechanics to belong to. They teach sobriety and honesty and fit out a mechanic of any trade in far better shape to command and get better wages then for a mechanic to plod through life in a slipshod manner, with no chances to learn only what he learns in the first year or so of his apprenticeship.”

In that environment, a mere two years after the United Association of Plumbers, Gas Fitters, Steam Fitters and Steam Fitters’ Helpers of the United States and Canada – precursor of today’s “U.A.” (United Association of Journeymen and Apprentices of the Plumbing and Pipe Fitting Industry of the United States and Canada) – Local No. 33 was chartered on November 1, 1891, to serve Des Moines and Central Iowa. The new local’s charter was signed by U.A. General President J. A. Lee and General Secretary Treasurer H. D. McGhan. 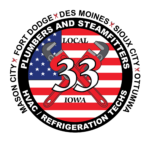